When Alexandrian Summer was first published in Israel in 1978 by Am Oved, the country’s most prestigious publisher at that time, the back cover boasted the following statement: “An achievement and innovation in Hebrew Literature.” I was living then in the U.S. and had nothing to do with that hazardous claim. Since it was my first novel, I didn’t know that the publisher, and not the writer, is accountable for the book jacket copy. I was sure the literary critics wouldn’t appreciate such a self appraisal and would hound me even if they’d agree with the assessment. Thank God, the critics didn’t take it hard and the only one who seemed to notice the statement, a reviewer for the daily Maariv named Shulamith Gilboa, made the remark that “this is one of the rare cases where the back reflects the front.”

So I got away with my pants still on. And still, I didn’t quite understand what was so innovative about my novel. I always believed I had written a simple, modest and unpretentious book. I was aware that it held a certain attraction, and I felt that the critical acclaim was largely owing to its inherent charm and the love affair that ensued between readers and my novel, but I still couldn’t understand what made it so special.

Then, one day I realized: “Aha! I know the answer! Israeli literature is usually obsessed with themes like the kibbutz, the Holocaust, the Palestinians, and the Jerusalem Syndrome. People found it refreshing to read about Diaspora Jews— albeit from an Arab country—who were not wretched and pitiable like those from the shtetl! And it’s no wonder: It took me 37 years to unleash myself from constraints of the Israeli melting pot that dictated what’s in and what’s out in Israeli culture, and to have the audacity to think that writing about coquettish decadent Alexandria is as legitimate in Hebrew literature as debating Zionist questions.” Putting aside any literary accomplishments, of which I surely cannot be an impartial judge, what made Alexandrian Summer special was its social achievement. Here was a book that did not engage with any of the prevailing themes—not out of refusal—but simply because the world I chose to write about, the world I grew up in, was elsewhere.

The book sold well, over 30,000 copies, and eventually went out of print and became a collector’s favorite at second hand bookstores. So I was at peace, I wrote other books, and pursued a career in the theater. But then came an essay written by a serious scholar, a professor from CUNY. In his pioneering book of literary research After Jews and Arabs, Remaking Levantine Culture, Ammiel Alkalay crowned Alexandrian Summer as “a narrative tour de force that presages a number of developments in Hebrew fiction.” Alkalay hailed the unique use of time in the novel, and the alternating narrative points of view from the same individual, yet told years apart: a 10-year-old boy experiencing life, and the same person as an adult reminiscing and reflecting upon his childhood. But in 1978, neither I nor anybody else I was hanging around with knew anything about postmodernism.

Shulamith Gilboa, the critic who made the comment about the rave on the back cover, also had this to say about her reaction upon reading the novel: “It is embarrassing to admit, but you read original Hebrew literature while having the relaxing feeling as if you are reading a translation… The style is simple, realistic, doesn’t adorn itself with superfluous words or details. It has a clarity which creates a calm rhythm that makes the book so readable.” Gilboa meant this as a compliment: at that time, Hebrew literature harbored an inferiority complex toward foreign literature.

So—how come it took another 37 years to see this novel in its English version, when there’s much Israeli literature constantly being translated and reaping admirable success in the international market? Maybe this too can be attributed to the fact that these same themes of the kibbutz, the Holocaust, the Palestinians and the Jerusalem Syndrome, dominate in translated Hebrew literature and elbow Levantine Alexandria off the shelves.

In all my literary work (that embodies much more than just Alexandrian Summer) I have usually been deaf to literary trends in Israel and in the world at large. Trends are useful things to pay attention to if one has an aptitude for public relations; I’ve always been a pretty weak hand at that.

Having gone through the process of seeing my work translated for the first time, I must confess that after reading the edited English version, I experienced two opposing feelings that may be one: On the one hand, I was captivated by the reading as if it was a new novel written by someone else, and at the same time, I felt that this is indeed my novel, but in another language, the way I would have written it if my language of literary expression was English.

During the process of working with Yardenne Greenspan, the translator, I realized to my surprise that Alexandrian Summer is very difficult to render in another language and another mentality, mainly because of its use of multiple languages (English, French, Judeo-Spanish, Turkish, Greek, Italian and Arabic) that were typical to cosmopolitan Alexandria. As simple and naturalistic as its style seemed, on the surface, it was extremely important not to lose the poetic and mythical undertone. The translation and its editing helped in capturing the soul and essence of the book—that elusive and magical Mediterranean ambiance. But more than that—bestowing the work, in another language, with the right PACE! As a man of the theater, I recognize the importance of pace.

I must confess that when I wrote the novel back in the 1970s, I was very pleased with the simplicity of my Hebrew, devoid of flowery mannerism. But my editor at Am Oved publishing house insisted on “elevating” my style. I tried my best to simplify his changes, but living abroad meant every communication went through mail (no email in those good old days), and since it was my first novel, there was a limit to what I could accomplish. So the Hebrew version still has a few archaic elements I was forced to put up with—after all, as a young writer, I had to be thankful they’d even accepted my novel. Now, nearly forty years later, this fresh English version is a kind of vindication, closer to my initial intention, and has inspired me to republish the novel in Hebrew with some of those alterations. It may be that this extinct novel about a vanished Alexandria is coming back to life as a true “achievement and innovation in Hebrew literature.” 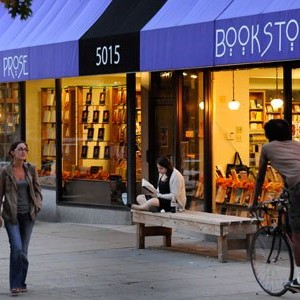 Some author events draw a crowd because the audience is a devotee of the author, or because the topic is controversial. Sometimes,...
© LitHub
Back to top