About halfway through Ryusuke Hamaguchi’s three-hour film someone asks Yūsuke Kafuku, an actor and theater director, why he didn’t cast himself as the titular character in his production of Uncle Vanya. “Chekhov is terrifying,” he replies. “When you say his lines, it drags out the real you.”

If this sounds like melodrama, Hamaguchi has declared his love of the genre. But this isn’t Douglas Sirk or Pedro Almodóvar. The plot machinations are subdued, stretched out—an acoustic cover of a pop earworm. For Hamaguchi, tone supersedes plot, and an actor’s face always says more than a line of dialogue.

The film is adapted from a short story by Haruki Murakami, from 2014’s Men Without Women. Kafuku is a typical Murakami protagonist: He listens to classical music on vinyl, smokes cigarettes, and finds women’s motivations utterly opaque. (Thankfully there are no cats or wells.) Murakami has achieved the level of international fame where Knopf is publishing what is essentially an IG grid of his closet. From the evidence of Drive My Car and Lee Chang-dong’s Burning (2018), Murakami’s short fiction seems an untapped reservoir for adaptation. (Seriously, watch Burning.)

Approach Drive My Car as you would a stage play, with your phone in airplane mode.

Drive My Car, which won three awards at the Cannes Film Festival, patiently follows Kafuku through the casting, rehearsals, and premiere of Uncle Vanya. The actors perform in Japanese, Cantonese, Korean, and Korean Sign Language—the theater audience reads supertitles, as in an opera—and reflects Hamaguchi’s interest in performance and interpretation. (One could read this as his preliminary hedge against negative criticism—I don’t.) The simultaneous, multiple takes on Chekhov don’t highlight the ineffable gaps in communication, as one might expect. Rather, we’re shown how art circumvents these gaps to deliver an inclusive, particular force.

The title refers to the hired driver who shepherds Kafuku to and from rehearsals, in a coveted red Saab, as he listens to taped recordings of the play’s dialogue. His driver is played with armored reserve by Tôko Miura, whose own story gradually takes center stage. Her bond with Kafuku and her own reckoning with loss inform the devastating final scenes. I know, I know. “Devastating” has been overused to the point of cliché. But I whispered “Holy shit” and “Jesus Christ” like a mantra during Hamaguchi’s long, considered takes.

To discuss the plot any further would risk spoiling Drive My Car‘s wending paths. As you’d guess from the setting, there are themes of ruination and long-buried grief. And like Murakami’s interest in Western culture, Hamaguchi shows his admiration for French New Wave filmmakers like Jacques Rivette. Much of Drive My Car is in dialogue with other films. There’s an audition scene with Takatsuki which recalls Naomi Watts’s from Mulholland Drive. You can see Turkish master Nuri Bilge Ceylan in the compositions and editing. And the long, revelatory car rides join a mini canon with George Sluizer’s The Vanishing (the German version) and Charlie Kaufman’s I’m Thinking of Ending Things.

But Hamaguchi is his own capital-f Filmmaker. While the musical score is more distracting than illuminating—a similar issue in his previous film Asako I & II—many of his scenes are both innovative and beautiful.

Take for example those car rides listening to Uncle Vanya. Kafuku’s wife Oto recorded them to help him run lines for an earlier production; he fills the silences with dialogue like, “My life is lost. There’s no turning back.” We wonder if this is part of his scheme to eventually fire Takatsuki and reprise his own Vanya. The lines also comment on his inner state—Kafuku really is adrift. Are the recordings stunting his grief? Is it healthy to listen to your dead wife’s voice for hours every day? (Does it matter if it’s Chekhov?) Meanwhile, the dialogue Hamaguchi’s chosen from the play echo the blunt declarations of those French New Wave films, and in so doing—from Chekhov to Rivette to Hamaguchi—collapse a century of mediated performance into a single shot.

I whispered “Holy shit” and “Jesus Christ” like a mantra during Hamaguchi’s long, considered takes.

The film’s production was delayed because of COVID, its shoot relocated from Korea to Japan. (Hamaguchi’s next film, Wheel of Fortune and Fantasy, has already garnered film festival laurels and will be distributed in 2022.) Drive My Car is hitting cinemas when blockbusters like Dune and Black Widow are experimenting with day-and-date streaming. Some films seem ready to bridge the big and small screens. The French Dispatch is so chock full of blink-and-you-miss-it visual wit that it delivers both cinematic rapture and, for the at-home viewer, fresh discoveries with each re-watch. What these examples have in common—beyond their Western productions—is a dedication to spectacle. Will you miss some of Dune‘s grandeur if you check Twitter while the Harkonnens attack Arrakis? Sure.

Drive My Car exists in a different realm, and I fear it will become a casualty of our pandemic-era viewing habits. This would be a shame; it might be a masterpiece. And you wouldn’t second-screen “Guernica.”

I’m not being glib. Much like the Picasso painting, Hamaguchi’s film works in muted shades to convey profound grief (both collective and personal) and the multivarious consequences of the Second World War. Approach Drive My Car as you would a stage play, with your phone in airplane mode.

Hamaguchi all but tells us as much. In that scene between Kafuku and Takatsuki, when the young actor expresses misgivings about his role, Kafuku says he must yield to the text and respond to it: “The text questions you.” While Kafuku may not be ready to be so nakedly questioned, we should be.

Give yourself over to Drive My Car. Let it drag out the real you. What else is art for? 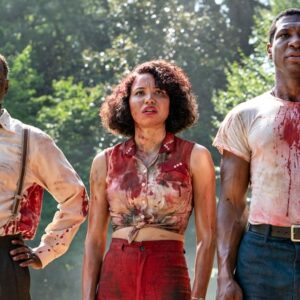